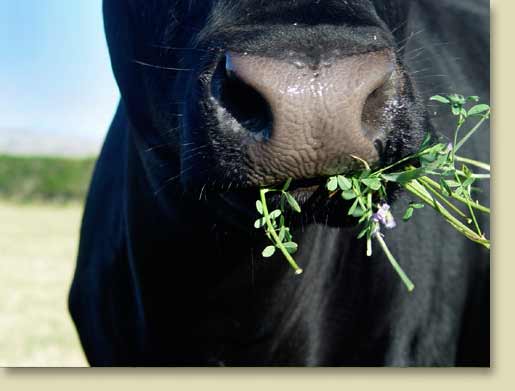 Diet has a profound effect on the health of an animal and the meat it produces.

Their high quality forage and life outdoors lead to a leaner, more flavorful beef with two to six times more of a type of "good" fat called "omega-3 fatty acids" as well as more of the vitamins E, C and Beta-Carotene.

Above left, rye grass growing in one of our pastures with clover on the right

Above, a healthy mix of rye grass and clover growing in another pasture

Following are some of the points Robinson makes in her book with references listed below:

4.  Simopolous, A. P. and Jo Robinson (1999). The Omega Diet.  New York, HarperCollins.  My previous book, a collaboration with Dr. Artemis P. Simopoulos, devotes an entire chapter to the vital role that omega-3s play in brain function.

12.  Dhiman,  T. R., G. R. Anand, et al. (1999). "Conjugated linoleic acid content of milk from cows fed different diets." J Dairy Sci   82(10): 2146-56.   Interestingly, when the pasture was machine-harvested  and then fed to the animals as hay, the cows produced far less CLA than when they were grazing on that pasture, even though the hay was made from the very same grass.  The fat that the animals use to produce CLA is oxidized during the wilting, drying process.  For maximum CLA, animals need to be grazing living pasture.